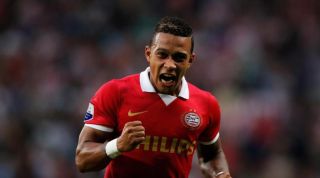 Having opened the new campaign with a 3-1 win at Willem II, PSV were in control once again on Saturday as Georginio Wijnaldum and Memphis Depay both netted braces.

Wijnaldum broke the deadlock in the 21st minute, running onto a well-placed Depay throughball to sidefoot home from 12 yards.

Aleksandar Damcevski inadvertently diverted the ball into his own net from a Santiago Arias cross in the 26th minute, but Adnane Tighadouini gave NAC hope from the penalty spot five minutes later.

Arias' challenge on Erik Falkenburg had set up the opportunity for Tighadouini.

Depay curled home a superb 20-yard free-kick six minutes into the second half to re-establish PSV's two-goal advantage, before Jurgen Locadia drilled in an unstoppable effort from just outside the area - Luuk de Jong providing a neat assist.

The result was already beyond doubt when PSV unlocked the NAC defence with some excellent passing to set up Wijnaldum for a fifth before the match had even reached the hour mark.

And Depay rounded off the scoring with another curling free-kick finish in the 73rd minute, arguably better than his first.

Twente, who finished third in the Dutch top flight last season, remain without a victory in this campaign following a 2-2 draw with Den Haag.

Kamohelo Mokotjo put the Enschede outfit in front just before the break, but goals from Roland Alberg - from the penalty spot - and Mike van Duinen turned the scoreline on its head.

After beginning life in the Eredivisie with a win at Heerenveen last weekend, Dordrecht were brought back down to earth in a 2-1 defeat at home to PEC Zwolle, although they very nearly snatched a draw.

Ryan Thomas opened the scoring for Zwolle five minutes before the interval, but Giovanni Korte's equaliser nine minutes from time looked to have earned a share of the spoils.

However, Mustafa Saymak popped up deep in stoppage time to reclaim the lead and maximum points.

In the day's remaining fixture, Vitesse conceded in the 89th minute as they were held to a 2-2 home draw by Cambuur.