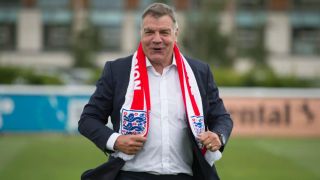 The Football Association (FA) made the right choice appointing Sam Allardyce as England manager, according to former boss Sven-Goran Eriksson.

Allardyce fronted the media for the first time on Monday after replacing Roy Hodgson following England's dismal last-16 exit to Iceland at Euro 2016.

The appointment of the 61-year-old has been an unpopular one among some sections of supporters, with questions over his big-game experience and style of play surfacing.

However, Eriksson – who now coaches Shanghai SIPG in the Chinese Super League after spending five years in charge of England from 2001 to 2006 – has endorsed the selection of Allardyce as the national team manager.

"I know him quite well, since many, many years," the 68-year-old Swede told Omnisport.

"He is a good man, that's for sure. He is a football man. He is very organised.

"And wherever he has been, he has done a good job. He did it for Bolton. He got them to Europe [the UEFA Cup – now known as the Europa League – after finishing sixth in 2005]. And then he went to West Ham and Sunderland.

"I think it's a good choice by the FA, so good luck Sam."

September 4 will see Allardyce's England make the trip to Slovakia for their opening 2018 World Cup qualifier.

England have been drawn in Group F for the road to Russia, alongside Scotland, Slovenia, Lithuania and Malta.