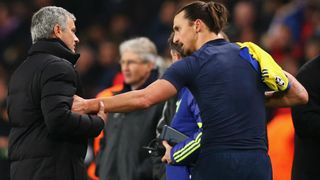 Ibrahimovic - 35 in October - swapped French champions Paris Saint-Germain for United as a free agent at the start of July, reuniting with former Inter boss Mourinho.

Fans will get their first glimpse of Ibrahimovic when United face Turkish giants Galatasaray in Saturday's pre-season fixture in the star striker's native Sweden.

And Eriksson - now coaching Shanghai SIPG in the Chinese Super League - hopes the former Barcelona, Inter, AC Milan and Juventus striker can add the Premier League to his LaLiga, Serie A and Ligue 1 titles.

"I'm not surprised he went to United," Eriksson told Omnisport when asked about Ibrahimovic's decision to move to England at the age of 34.

"Mourinho has the reputation, similar to Zlatan, that when they go to a new club they normally win in the championship in the first year.

"So why not? Mourinho and Zlatan it could be enough to win the Premier League.

"It would be great for both of them, especially for Zlatan. That would be something incredible, if he could also add that to his other titles."

Ibrahimovic and Co. kick-off their Premier League season against Bournemouth on August 13.