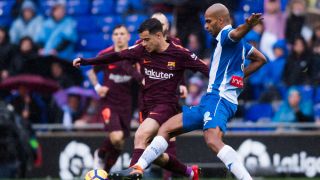 Gerard Pique was a deeply unpopular goalscorer at Espanyol as Barcelona battled back to preserve their unbeaten La Liga record with a 1-1 draw on Sunday.

This clash was the rivals' third meeting in two and a half weeks after Barca prevailed 2-1 over two legs of a closely contested Copa del Rey quarter-final last month.

Pique prompted an Espanyol complaint to the Spanish Football Federation after the first leg of that tie following comments he made disputing the clubs' rivalry over the location of Espanyol's stadium.

It looked as though the home fans would have the last laugh at a sodden RCDE Stadium when Gerard Moreno got in ahead of Pique to head home Sergio Garcia's excellent cross midway through the second period.

Seemingly with one eye on Thursday's Copa semi-final second leg against Valencia, Ernesto Valverde opted to start Lionel Messi on the bench and the Argentine genius had only been on the field seven minutes when Moreno struck.

Barca seemed to be heading for a first La Liga loss under Valverde as the saturated pitch prevented the leaders implementing their slick passing style but the equaliser arrived via a more conventional route as Pique rose highest to head home Messi's free-kick eight minutes from time.

Pique, whistled throughout the contest, signalled for the home fans to be quiet and he was subsequently involved in an altercation with Moreno in the closing stages as the defender revelled in his role as the pantomime villain.

The relentless downpour seemed to slow the early stages as the opening 20 minutes were something of a damp squib before Philippe Coutinho almost lit up an otherwise drab affair.

Receiving the ball towards the left of the box, the Brazilian worked space for a 20-yard shot which had Diego Lopez comfortably beaten before it crashed off the crossbar and away to safety.

23 - have hit the woodwork 23 times already in this season, more than any other top five European leagues team. Centimeters. February 4, 2018

That near miss appeared to spark Espanyol into life as Leo Baptistao stung the palms of Marc-Andre ter Stegen before the same player headed over an excellent chance from Marc Navarro's fine cross.

Luis Suarez's free-kick and Paulinho's header were both off target as Barca sought the opener before half-time without success.

After a largely turgid first period, Espanyol almost lit the blue-touch paper within a minute of the restart as Baptistao set up Esteban Granero to smash home, only for the officials to correctly rule the ball had gone out of play in the build-up.

Valverde decided enough was enough and sent on Messi prior to the hour and Barca gained a lift, Suarez firing straight at Lopez on the turn from a tight angle.

But it was an Espanyol replacement who made the telling intervention, Garcia delivering a superb right-wing cross within five minutes of coming on that Moreno nodded beyond Ter Stegen.

Garcia was perhaps fortunate to only see yellow for a wild lunge on Samuel Umtiti and, as Barca cranked up the pressure, Espanyol finally cracked when Pique thumped in a header to rub further salt into Espanyol's wounds.