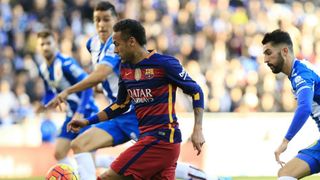 Accusations that racist chanting was aimed at Barcelona star Neymar from a section of the Espanyol crowd have been rejected by the club's president Joan Collet.

Espanyol earned a 0-0 draw in the derby between the teams on Saturday in front of a boisterous Cornella El Prat, but it was events off the pitch that earned headlines following the game.

Brazil international Neymar was reportedly subject to racist chanting in the first half, with former Barca board member Toni Freixa writing on Twitter: "I trust that the racist chants which Neymar was subjected to have been carefully noted in the referee's report."

Barca midfielder Andres Iniesta also stated he heard abuse "in one corner, in the first half, from one supporter."

However, Collet flatly denied the allegations.

"I was there, just like 30,000 people and nothing happened," he was quoted as saying by AS. "The whole thing blows up for one shout, but there was nothing generalised, it's a lie.

"It was a high-risk game and there weren't any incidents. The attitude of the fans was admirable. It was a game we can feel proud about and it makes us very excited about the future."

Collet also hit back at criticism of Espanyol's perceived aggressive tactics during the encounter.

"When something happens they bring out the topic of violence and it's a disgrace. It's a lie that we were violent. Every time they don't win it's the same commentary.

"Only a few see this violence and they try and justify not winning. It was a normal game and I think the referee was spot on and didn't see any sending-off offences."