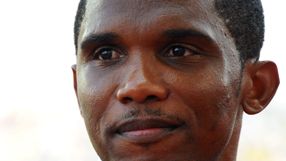 "Barcelona would like to make public their thanks to Samuel Eto'o for his willingness to bring this contentious issue to an end," the European champions said in a statement. "He was one of the greatest goal-scorers in the club's history."

The Cameroon forward, who is now with Russian Premier League Anzhi Makhachkala, went to Inter as part of a swap deal with Zlatan Ibrahimovic.

Swede Ibrahimovic, now with AC Milan, cost Barca a fee of 46 million euros while Eto'o was valued at 20 million euros.

Eto'o had based his demand on Spanish Players Union (AFE) rules, whereby a player has the right to claim 15 percent of any transfer fee.

Barca's legal services countered by saying the AFE ruling was only applicable to transfers between Spanish clubs.