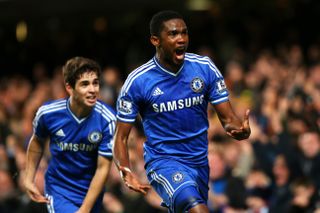 Eto'o, who joined Chelsea from Russian outfit Anzhi Makhachkala in August, scored a hat-trick as Jose Mourinho's side kept within two points of Premier League leaders Arsenal with a 3-1 home win over Manchester United on Sunday.

The 32-year-old's treble against United took his tally for the season to eight goals, a club tally bettered only by attacking midfielder Eden Hazard, who has 11.

However, despite his impressive performances in his time at Stamford Bridge, Eto'o is keen to finish his career at Spanish Segunda Division club Mallorca, where he enjoyed a four-year spell between 2000 and 2004 before moving to Barcelona.

"I'll always like Barcelona, but I personally prefer Mallorca," the Cameroonian said. "My son has pressured me to finish my career there, my son is from there.

"I have signed on at Chelsea for the entire season and will try to enjoy it and later on, I will go to Mallorca."