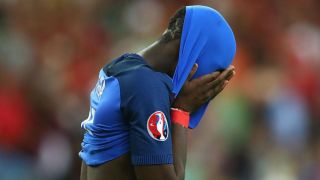 Eder's super extra-time winner sent France's Euro 2016 hopes heading in the wrong direction. Their celebratory bus is sure to do likewise.

HEADING QUICKLY BACK DOWN THE MOTORWAY...

Obviously, celebrations for winning major football tournaments cannot just be thrown together like an impromptu garden party, but perhaps the organisers of the party France will never enjoy might have been a touch more subtle.

Sending a "Champions of Europe" bus hurtling down the motorway in broad daylight is set to become the joke that will never get old in Portugal.

First thing Monday morning, get the whitewash out. Pronto.

Once against, the Champ de Mars location under the gaze of the Eiffel Tower proved a huge draw and was packed to capacity to see Didier Deschamps' men fall short.

There were unfortunately some skirmishes outside the fan zone but fans mingled together and the Portuguese contingent celebrated without hassle, underlining the initiative's status as one of Euro 2016's success stories.

Three hours to go until kick off and the Paris fanzone is already packed full of hopeful French fans July 10, 2016

Maybe that bus driver is a go-getter who holds down a second job with Adidas?

The sportswear giant lit up the Arc de Triomphe, placing Paul Pogba alongside France icon Zinedine Zidane - suggesting the Juventus midfielder was set to make history as his countryman did with two goals in the 1998 World Cup final win over Brazil at the Stade de France.

The reality was somewhat different, as Pogba struggled to live up to his £100million price tag and was outshone in the France midfield by recently relegated Newcastle United midfielder Moussa Sissoko.

Only true legends write history. is ready to join the greats July 10, 2016

LET'S ALL DO THE CONGA

Naturally, Portugal were in the mood for celebrations and the early stages of these in the stadium doubled up as a handy way to avoid us pesky journalists.

A mixed-zone interview with the unfortunately quietly spoken Cedric Soares came to an abrupt end when his team-mates, en masse, snaked their way through the crowds with an all-singing, all-dancing conga. Hero of the hour Eder was front and centre, while Cristiano Ronaldo braved that knee injury to play his part in the festivities.

Southampton centre-back Jose Fonte was asked to stop and apologised, simply pointing to the conga - an awesome force all of us were powerless to stop.

One way of avoiding interviews... conga their way out of Stade de France mixed zone July 11, 2016

STUFF DREAMS ARE MADE OF FOR UMTITI

Samuel Umtiti has been one of the finds of the tournament, playing with composure one would not readily associate with a previously uncapped 22-year-old at the heart of France's defence.

He will swap Lyon for Barcelona next season and looks set for many more memorable outings on the biggest stage when he overcomes Sunday's heartbreak.