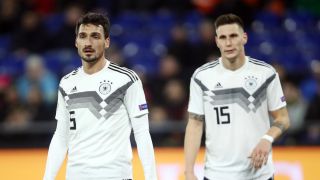 Oliver Bierhoff says Germany will be itching for revenge against Netherlands in Euro 2020 qualifying.

Die Mannschaft endured a miserable 2018, with their World Cup defence ending at the group stages, while they were relegated from League A of the inaugural Nations League.

The latter disappointment included a 3-0 loss to the Dutch in October before the return match finished in dramatic circumstances as late goals from Quincy Promes and Virgil van Dijk earned Ronald Koeman's men a 2-2 draw and a semi-final berth.

In a coincidental twist, Germany will have a quick chance to avenge those losses against their rivals after being drawn alongside Netherlands, Northern Ireland, Estonia and Belarus in Group C of qualifying for Euro 2020, much to the delight of DFB general manager Bierhoff.

"It could have been harder for us," he said.

"We are happy that we have the [chance for] revenge against the Netherlands.

"We know that our way back to the top of the world must lead us through tough opponents."

And now our qualifying group is complete!Bring on the December 2, 2018

Despite having a favourable-looking draw, head coach Deschamps implored Les Bleus not to take the task lightly.

"There are teams that we know well because we usually meet them like Iceland and Albania," he said.

"There will be a trip to Turkey, where it is always a very hot atmosphere.

"We realise that all matches are difficult. The qualifications are a long course and we will have to take more points than our opponents.

"There are no small matches and we will have to play them all with the seriousness and concentration necessary to achieve our goal."