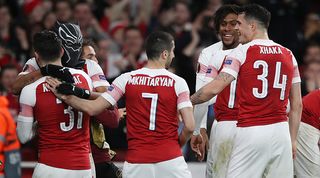 Arsenal will face Napoli in the quarter-finals of this season's Europa League.

The Gunners overturned a 3-1 first-leg defeat against Rennes to make it this far, triumphing 3-0 at the Emirates Stadium on Thursday night.

Napoli beat Red Bull Salzburg 3-0 in their first leg before losing 3-1 in the second, but in reality, the Italians were perhaps the one side other than Chelsea that Unai Emery's men wanted to avoid.

Chelsea, meanwhile, have been rewarded for their 8-0 aggregate honking of Dynamo Kiev with a clash against Sevilla's late victors, Slavia Prague.

Prague were heading out on away goals against their La Liga opponents, but netted a dramatic 119th-minute winner via Ibrahim Benjamin Traoré in a 4-3 thriller.

Napoli OR Arsenal vs Villarreal OR Valencia

Benfica OR Eintracht Frankfurt vs Slavia Prague OR Chelsea