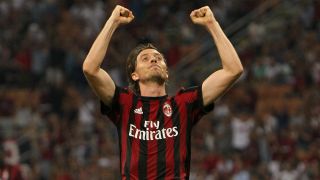 AC Milan seized control of their Europa League play-off tie with a 6-0 first-leg victory over Shkendija at San Siro on Thursday.

Two goals each from Andre Silva and Riccardo Montolivo and further strikes from Luca Antonelli and Fabio Borini gave Milan their biggest European win in 24 years as they took a huge step towards the group stage.

Everton are also likely to progress from their play-off after claiming a 2-0 victory over Hajduk Split at Goodison Park.

Michael Keane's first goal for the club put Ronald Koeman's side ahead before Idrissa Gueye converted a Wayne Rooney pass to secure an important win.

There was a shock for Fenerbahce, meanwhile, as they slipped to a damaging 2-0 defeat to Vardar in Macedonia.

Tigran Barseghyan opened the scoring before an own goal from Mehmet Topal in second-half stoppage time put Vardar in charge of the tie, with Boban Grncarov and Souza sent off for either side before full-time.

Athletic Bilbao scored three goals in six minutes to come from two down for a 3-2 win at Panathinaikos, Aritz Aduriz scoring either side of an Oscar de Marcos strike to secure a thrilling triumph. Apollon Limassol defeated Midtjylland, who reached the last 32 two seasons ago, and Krasnodar edged out Red Star Belgrade by the same scoreline.

Marseille were held to a frustrating 1-1 draw away at Domzale, while there were bigger concerns for Ajax, who lost 1-0 to Rosenborg in Amsterdam thanks to a goal from substitute Samuel Adegbenro.