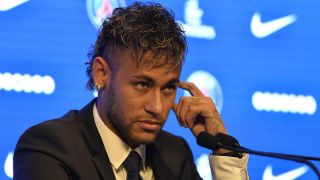 Spain brought down the curtain on Europe's trading in the transfer window on Friday but the major drama had already occurred.

Neymar stunned the footballing world by joining Paris Saint-Germain from Barcelona for a record €222million and, as if that was not enough, the capital club then moved again before the deadline to secure Monaco protege Kylian Mbappe.

The 18-year-old France striker was not the only significant departure from Monaco's Ligue 1 title-winning side, while an AC Milan under new ownership and with renewed ambition made waves in Italy.

Barcelona found themselves trying to pick up the pieces, often in scattergun fashion, after losing one of their prized assets.

Here, we assess how the Catalan giants and other European heavyweights rank for their overall business...

UEFA's Financial Fair Play investigation into PSG might yet derail what has been an extraordinary few weeks of recruitment activity at Parc des Princes, but they are unquestionably the club who have the most to shout about at the end of trading. Neymar and Mbappe thrown together in the same forward line is simply fantasy football and PSG will be feared by the more established members of Europe's elite like never before. Unai Emery's main job in attack will be keeping the likes of Angel Di Maria, Julian Draxler and Edinson Cavani happy with the two new A-listers in their midst. Not a bad problem to have.

While PSG's splurge is the most audacious leap towards the summit from a recently established European giant, AC Milan have splashed the cash in a bid to return to a top table at which they were once permanent residents. Li Yonghong's Rossoneri Sport Investment Lux has bankrolled a whole team's worth of new arrivals to Vincenzo Montella's senior squad. Bringing in Leonardo Bonucci from Juventus was a major statement of intent, one Milan fans will hope prompts a sea change in Italian football, as Andrea Pirlo's switch in the opposite direction did six years ago.

Bayern Munich successfully improved their squad in the transfer window while resisting the temptation to spend huge money as the market exploded over the final weeks. They did opt to let Douglas Costa join Juventus, but had already sealed a permanent move for loanee Kingsley Coman late last term, and saw their pre-arranged moves for Niklas Sule and Sebastian Rudy finalised. One for the future, Serge Gnabry arrived and was then loaned out, before Bayern made two genuine star additions. Versatile France midfielder Corentin Tolisso, still only 22, came in from Lyon for a Bundesliga record fee, while James Rodriguez – a world star with a point to prove – arrived on a relatively low-risk two-year loan deal from Real Madrid, delighting fans of the German champions.

It was a miserable transfer window for Barcelona, leaving club president Josep Maria Bartomeu with a lot of explaining to do. The club's second biggest star, Neymar, opted to leave after his monstrous release clause was sensationally met by PSG. Already an amazing contributor for Barca - and Lionel Messi's likely eventual successor - the Brazil star is now gone. A deal could not be struck for first-choice replacement Philippe Coutinho due to Liverpool reportedly demanding €200m, with huge pressure now on €147m man Ousmane Dembele from Borussia Dortmund to deliver, even though he has only spent two years as a professional. Other additions like Paulinho do not inspire confidence for the post-Neymar era.

Massimiliano Allegri's decision to sell Bonucci to Milan after falling out with the defender was one of the more eyebrow-raising moves of the transfer window and the coach could yet regret it, with Giorgio Chiellini succumbing to a calf problem in the early weeks of the season. Allegri bolstered his options at the back with the arrivals of Mattia De Sciglio, Medhi Benatia and Benedikt Howedes, but Bonucci may prove a huge loss, breaking up the formidable 'BBC' partnership he formed with Chiellini and Andrea Barzagli in front of legendary goalkeeper Gianluigi Buffon. It wasn't all bad for Juve, however, as the perennial Serie A champions retained Paulo Dybala despite speculation linking the Argentine forward with Barcelona, while wingers Federico Bernardeschi and Douglas Costa, as well as PSG midfielder Blaise Matuidi, are solid additions to an already strong squad.

Monaco's transfer window saw them effectively give up their ambitions of remaining at Europe's top table after stunning the continent last season by winning Ligue 1 and reaching the Champions League semi-finals. Sure, Youri Tielemans and Keita Balde represent exciting new arrivals who could develop into world stars and be sold on at significantly higher prices. But the level of talent to leave has been astonishing. Kylian Mbappe, the game's hottest property, has not only left but gone to title rivals PSG, while three of last season's other stars, Benjamin Mendy, Bernardo Silva and Tiemoue Bakayoko, have also moved on. If the player had not rejected a last-minute move to Arsenal, Thomas Lemar would have departed too.

Operating under the radar compared to their usual 'Galactico' signings, Real Madrid may well have had the best transfer window of any European giants. They did not land Mbappe, but all the stars remain in place despite near-constant speculation about Cristiano Ronaldo and Gareth Bale, although misfit James headed to Munich. Zinedine Zidane also beat out a host of European rivals to sign a trio of the world's hottest young talents, with Dani Ceballos, Theo Hernandez and Vinicius Jr adding further depth to a phenomenal squad that boasts plenty of room to develop further via the likes of Marco Asensio. No club has won the tournament three years in a row since Bayern Munich back in the 1970s, but a third successive Champions League crown could be on the cards for Madrid in what increasingly looks like an era of dominance for Los Blancos.