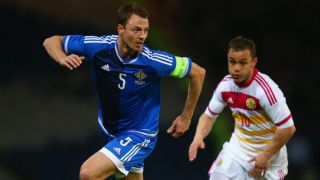 Jonny Evans has ended his association with Manchester United, signing a four-year deal with West Brom after the two clubs agreed an undisclosed fee.

The Northern Ireland centre-half made 196 appearances for United in all competitions after coming through the club's youth system.

However, he has fallen down the pecking order at Old Trafford in recent times and will now look to kickstart his career under Tony Pulis.

"This is a great signing for the club," Pulis told West Brom's official website.

"Jonny brings a lot of experience and will be a big player for us - he's a player I've been watching for some time.

"We are delighted to have him on board."

Evans' move was announced after West Brom picked up their first win of the season on Saturday with a 1-0 triumph at nine-man Stoke City on Pulis' return to the Britannia Stadium.

"I hope to push the Albion up the league," said Evans - an international colleague of Chris Brunt and Gareth McAuley who joins former United team-mates Darren Fletcher, Ben Foster and James Chester at West Brom.

"It's a new, fresh challenge for me - one I'm looking forward to.

"I know a few of the lads already and I spoke to a couple, who highly recommended the club."