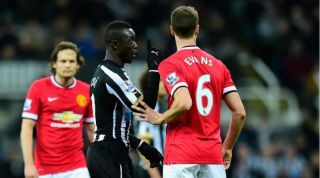 Evans had denied the charge, but was found guilty by an Independent Regulatory Commission hearing on Friday.

Cisse, meanwhile, accepted the same charge, incurring a six-game ban for spitting and an additional one-match suspension for a previous violent conduct charge.

Evans and Cisse were involved in an altercation during Wednesday's Premier League contest at St James' Park, which ended 1-0 in the visitors' favour.

Cisse initially appeared to aim a kick at Evans, who took exception to the striker's challenge before appearing to spit in his direction.

That indiscretion riled Cisse, who responded in turn by spitting back at Evans.

The Newcastle man later apologised for his actions, while Evans refuted the allegations against him.

Cisse's ban rules him out until the final three games of the Premier League season, while Evans - depending on the outcome of Monday's FA Cup quarter-final clash with Arsenal - could miss league matches against Tottenham, Liverpool, Aston Villa Manchester City and Chelsea.