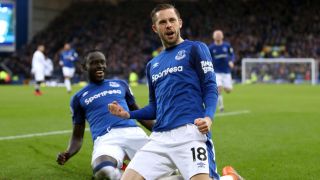 Everton defeated Crystal Palace 3-1 in the Premier League on Saturday to bounce back from their thrashing at the hands of Arsenal, as Sam Allardyce got one over his old club and fellow former England manager Roy Hodgson.

The home side struck twice in the space of six minutes through Gylfi Sigurdsson and Oumar Niasse to take control early in the second half at Goodison Park.

And Tom Davies' 75th-minute strike put the seal on the victory in a welcome tonic for a team hammered 5-1 by the Gunners in north London last time out, Palace pulling one back from the penalty spot with seven minutes remaining via Luka Milivojevic.

Palace keenly felt the absence of injured star Wilfried Zaha, as debutant Alexander Sorloth worked hard but struggled to make an impact in attack following his arrival from Midtjylland.

Hodgson watched on as Wayne Rooney, his captain during the pair's time together with the national team, excelled pulling the strings in an unfamiliar deep midfield role, Everton winning for just the second time in nine league matches to sit ninth in the table.

Having enjoyed a sharp upturn in form following Hodgson's arrival in September, Palace are now winless in four league games and, in the absence of Zaha for up to a month due to a knee injury, remain at risk of being dragged back into a battle against relegation.

5 - Luka Milivojevic has converted more penalties than any other player in the Premier League this season (5). Spot.February 10, 2018

A scrappy opening to the contest produced few clear chances for either side, Sigurdsson firing across the face of goal and wide of the post in the ninth minute after the lively Theo Walcott did well to hold the ball up and lay it off to his team-mate.

Milivojevic returned fire for the visitors at the opposite end three minutes later, the midfielder's firm strike from outside the area deflected behind.

And Wayne Hennessey was called into action to preserve the deadlock in the 27th minute, the Palace goalkeeper producing an excellent diving save to keep out a fierce Idrissa Gueye effort.

Everton were forced into a change with two minutes remaining in the half, Ashley Williams replacing Eliaquim Mangala, whose home debut came to a premature end due to a suspected knee injury following a collision with Hennessey.

The disruption may have allowed Palace to go close to scoring, Christian Benteke's downward header trickling past the post, as the stretching James McArthur narrowly failed to get a touch that could have turned the ball past Jordan Pickford.

A much-needed breakthrough finally arrived a minute into the first half, when James Tomkins failed to clear Pickford's long clearance up field.

Sigurdsson took possession with the help of Niasse and the Iceland international beat Hennessey to find the bottom corner of the net.

17 - Since his debut in January 2012, Gylfi Sigurdsson has scored more goals from outside the box than any other current Premier League player. Ranger.February 10, 2018

Niasse was left unmarked in the centre of the penalty area and left-back Cuco Martina picked him out with a cute chipped cross that the striker headed past the helpless Hennessey.

After being found by Patrick van Aanholt's cross, Sorloth was denied a goal on debut by a stunning Pickford save in the 65th minute.

It was Everton who struck the killer blow, though, Davies steering the ball home from close range after Hennessey had done well to keep out the initial attempt from Niasse following a slick attacking move.

Milivojevic struck from the spot with seven minutes to go following a handball inside the area from substitute Jonjoe Kenny, who had replaced Seamus Coleman at half-time.

But it was not enough to save Palace, who are 14th in the table and just two points clear of the drop zone. They face a tough assignment at home to Tottenham in their next outing, while Everton are due to visit Watford.