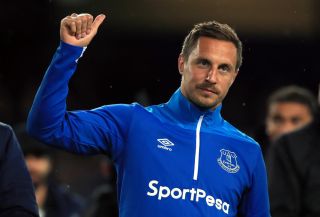 Marco Silva refused to discuss Phil Jagielka’s future at Everton as he insisted the club captain’s late cameo in the 2-0 victory over Burnley was not for sentimental reasons.

Jagielka has been at the heart of Everton’s defence for more than a decade but his contract is up at the end of a season where he has been limited to seven appearances.

The latest came in Everton’s final fixture of the campaign at Goodison Park, where he received a rapturous reception after replacing Gylfi Sigurdsson in added-on time.

Silva revealed he met Jagielka this week and is planning another conversation with the 36-year-old in the coming days.

However, when asked to divulge the details of the discussion, Silva said: “What I said to him is to stay between me and him.

“I didn’t talk just about the future, we talk about all season, about many things, at the end he is our captain, not just about what you want to do.

“But when I took that decision (to bring him on as a substitute) that was not because he will be here or not next season. I had one more to do.”

Everton kept their faint hopes of a top-seven finish alive as two goals in three first-half minutes, a deserved reward after a barnstorming start, handed them a fourth successive home win on Friday night.

Richarlison’s 17th-minute effort took a telling final touch off Burnley defender Ben Mee, while Seamus Coleman headed in on the rebound as Everton moved a point behind Wolves in seventh.

It is a position which will seal a Europa League berth if Manchester City defeat Watford in this month’s FA Cup final, although Everton’s aim will be extinguished if Wolves beat already-relegated Fulham this weekend.

“Of course the second half was not so good. We have tried to control the game, not with the ball, not doing the same things.

“But we deserve really the three points. All credit to our players, they did well again. Our job this weekend is done, now let’s see what the others can do.”

Everton’s 5-1 win at Turf Moor on Boxing Day left Burnley three points adrift of safety at the halfway stage of the season.

But only the two Manchester clubs and Liverpool have taken more points than Burnley since then, a scenario that means they guaranteed their survival before their penultimate fixture.

He said: “They’re human beings and they climbed a mountain in the second half of the season. To get the points we’ve got is a fantastic achievement.

“I’m certainly not going to over question the players. On the other hand you want them to win games and the winning mentality has seen us right this season.

“It’s still a bit frustrating but it’s only a low frustration level because things in the second half of the season could have been considerably different.”

Everton defender Michael Keane’s clumsy shove to the back of Matej Vydra on the edge of the area with a quarter-of-an hour remaining led to Burnley appeals for a penalty.

When asked for his view of the incident, Dyche responded: “I’m not sure it’s in the actual box, it’s very tight. It might be on the line of the box.

“I’ve had a quick look at it but I was more looking at the incident rather than if it’s in the box.”