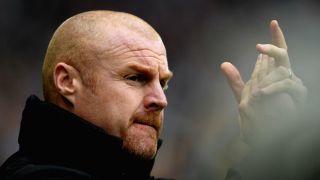 Burnley manager Sean Dyche has dismissed reports linking him with the vacancy at Everton as "other people's stories".

Everton sacked Ronald Koeman after Sunday's 5-2 defeat at home to Arsenal continued a dismal start to the season and left them in the Premier League's bottom three.

Caretaker manager David Unsworth oversaw an improved display in Wednesday's 2-1 EFL Cup loss at Chelsea and has expressed his desire to take on the post on a full-time basis, but Dyche has also been heavily touted as potentially the next man in the Goodison Park hotseat.

Speaking at a pre-match news conference for Burnley's home match against Newcastle United on Monday, the former Watford boss insisted current speculation matters little to him.

"Nothing has changed," Dyche told reporters. "I mentioned last week different links with different clubs have come around but you're flattered by the fact that some of your work, by all of what we do is recognised.

"There's no story, it's other people's stories. It's not mine, but it's right that I get asked about it.

"I've been through it, I’ve had the experience of them sort of links at various times, more so, the last couple of years. I've just continued to get on with what I do here.

"It doesn’t play on the mind at all."

Victory over Newcastle would lift Burnley above their seventh-place opponents and Dyche believes the stability brought about by his ongoing five-year reign and the commitment of players within that are vital factors in the club's current success.

"I'm surprised to be here for five years in the modern world, but equally I don't think fans want managers changing every week," he added.

"I have to thank all the players past and present for their hard work and, of course, the fans."