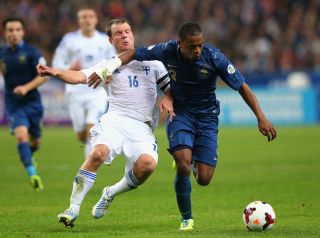 The Manchester United defender was summoned to explain his actions by the FFF after describing 1998 FIFA World Cup winner Bixente Lizarazu and three other commentators as "tramps" in a television interview for TF1 following France's 3-0 win in their World Cup qualifier against Finland earlier this month.

The pundits had criticised Evra for reportedly giving an impromptu team-talk during the interval of France's 4-2 win over Belarus in September.

However, the FFF have elected not to punish the 32-year-old, citing the regret shown by Evra as a key factor in their decision.

The left-back is now free to play in France's two-legged World Cup play-off with Ukraine next month, after they finished second behind Spain in UEFA qualifying Group I.

A statement on the FFF website read: "After hearing his explanations, and seeing the remorse shown by the player, and ahead of two decisive matches for the future of French football, president Noel Le Graet has decided that Patrice Evra remains available for selection for the national team."

Evra is a key figure in the France national team, and is just one cap shy of 50 for his country.

Didier Deschamps' France travel to Ukraine for the first leg of their play-off on November 15, before playing host to Mikhail Fomenko's men four days later.