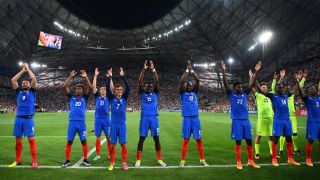 France defender Patrice Evra was delighted with his team's win over Germany, but urged them to take the final step at Euro 2016.

An Antoine Griezmann brace led Didier Deschamps' men to a 2-0 victory in Marseille on Thursday.

With the win, France reached their third European Championship final – in which they will face Portugal on Sunday.

A thrilled Evra was proud but reminded France they still had work to do to complete the job.

"We wanted to do something, we knew we were going to suffer," the Juventus man told beIN Sports.

"But we're there and we were very confident we were going to get into the final. And I'm very proud of all my team-mates and all the supporters who believed in us.

"Like I said, since the beginning, we will never let go, we are going to go all the way to the end. Tonight is magnificent, I'm happy, but it's not over."

Griezmann struck from the penalty spot late in the first half at the Stade Velodrome before poking in a second after the break.

Evra, who made his France debut in 2004, insists the current generation is ready to win the nation's first major trophy in 16 years.

"They are ready because I've played with many French generations, we've been strong before," he said.

"But this team here, since Didier Deschamps took over, there is something that we have from the beginning.

"What I say to the team is it's good that we're a family, but we have to do something.

"I told them at the beginning of the tournament … we have to become a nation that wins. We haven't done it in a long time.

"We have to give everything until the last second."