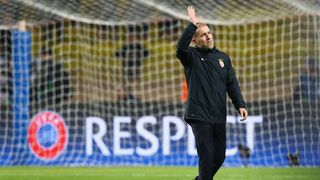 Borussia Dortmund's strength in depth and extra European experience means they have the edge over Monaco in their Champions League quarter-final, believes Leonardo Jardim.

The Ligue 1 leaders travel to Signal Iduna Park for the first leg and striker Radamel Falcao is likely to be available to partner teenager Kylian Mbappe in attack after recovering from hip injury.

Monaco have conceded more goals than any other side left in the competition and Jardim is wary of the threat posed by the likes of Pierre-Emerick Aubameyang and Ousmane Dembele.

"Dortmund's advantage is their greater international experience and deeper squad," Jardim told reporters on Monday. "We will have to be wary of their quality when defending. There has to be a balance.

"It is not easy trying to play with full intensity every three days. I don't know if a team has ever gone from the third qualifying round to the quarter-finals. We have had the most games of any team so far. Little by little the team develops in maturity. Young people grow up.

"The return of Falcao is important to bring quality and experience. I'm counting on Mbappe. He understood that the end of match against Angers [in which he was an unused substitute] was not for him."

Jardim will be without Tiemoue Bakayoko - who scored the decisive goal in a 6-6 away goals triumph over Manchester City in the last round - due to suspension, but the coach was quick to hail the importance of fellow midfielder Fabinho.

"Let's try with all our strength to get the best result," Jardim said. "We need to play with our DNA, play our game offensively and be alert defensively.

"Fabinho has the ability to organise the game, he is one of the best players in this position."

Jardim's assessment that Dortmund are the favourites to move into the semi-finals was backed up by Fabinho, who is expecting the tie to be full of goals.

"It is a really even tie," Fabinho said. "The teams are very similar, lots of young, attack-minded players.

"Dortmund have more experience in the Champions League than we do, but in the end the tie is wide open. It will be a very open game with lots of chances and maybe lots of goals. We are young and we learn quickly. That's one of the strengths of our young side.

"We're here, we're going to give everything to go as far as possible. We are not the best team or the favourites, but we'll give everything. Without Bakayoko, I will have a more defensive role."