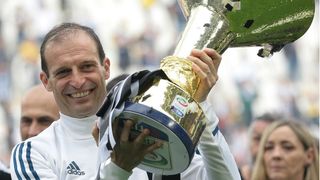 Massimiliano Allegri insists his "extraordinary" Juventus side deserved to win their seventh straight Serie A title - but congratulated Napoli for their efforts over the course of the season.

Juve capped off their campaign with a 2-1 victory over Verona on Saturday, as the Bianconeri faithful bid farewell to veteran goalkeeper Gianluigi Buffon.

Maurizio Sarri's Napoli led the Scudetto race for much of the season, but they ultimately failed to keep pace with their rivals in the closing stages of a two-horse race.

"The team had an extraordinary season and it’s always wonderful to win," Allegri told Mediaset Premium.

"We fought with Napoli throughout the year. We tip our hats to them, but we were the best.

"It's not right to criticise a team that has won everything in Italy for seven years and gone very close in Europe.

"The best side always wins in Serie A and over the last seven years, Juventus have been consistently the best, the ones with their names written in the history books.

"When you play for Juventus, you have to be a top-quality player. We never take anything for granted, nor accept we are beaten. That is a characteristic this club has ingrained."

Buffon is not the only stalwart leaving in the close season, with Stephan Lichtsteiner and Kwadwo Asamoah also departing.

Claudio Marchisio has also been linked with a move away from Turin, while doubts remain over the futures of Gonzalo Higuain and Paulo Dybala. Even Allegri himself has been a reported target for Arsenal, who are searching for Arsene Wenger's replacement.

However, the Juventus boss was unfazed by the immediate future - and confessed his disappointment at not enjoying greater success in the Champions League this term.

"We will meet next week to plan out the future, understand where we can improve and I don't think there will be any problems," he added.

"We missed the icing on the cake, which is the Champions League, but we can't know how it would've ended in extra time against Real Madrid."