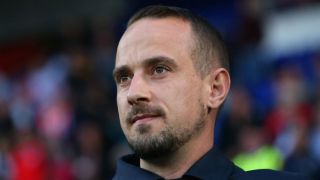 The Football Association has apologised to England women's players Eniola Aluko and Drew Spence after new evidence showed their former manager Mark Sampson to have made remarks that were "discriminatory on the grounds of race".

Sampson was sacked as England manager last month on account of "inappropriate and unacceptable" behaviour with female players in a previous role.

That controversy emerged after the 35-year-old was cleared of wrongdoing by an internal inquiry and an initial report by independent barrister Katharine Newton with regards to discrimination allegations made by England players, including Aluko.

However, after new findings were submitted to Newton, she found both Aluko and Spence were the subject of "ill-judged attempts at humour" from Sampson.

But Newton also concluded that Aluko was not subjected to "a course of bullying and discriminatory conduct" by Sampson, who the barrister does not believe is racist.

FA chief executive Martin Glenn said: "Our ambition has always been to find the truth and take swift and appropriate action if needed.

"It was our decision to have the original, second and final investigation to ensure that due diligence was taken.

"It is regrettable that Eniola did not participate in the first external investigation as this would have enabled Katharine Newton to conduct and complete her investigation sooner."

Aluko spoke at a parliamentary inquiry on Wednesday, with FA bosses including Glenn, chairman Greg Clarke and technical director Dan Ashworth also set to give evidence to the Digital, Culture, Media and Sport Select Committee as it looks into the Sampson affair.

Reacting to Newton's conlusions, Eluko – who has scored 33 goals in 102 appearances for England – told the inquiry: "My emotion is just relief as it's been a long process getting to this point. I'm not an architect or engineer of this situation, I've been put in it.

"I feel vindicated in honesty with the truth. I'm a human being and I feel relieved. It suggests it was kind of all worth it going through the trouble and having it vindicated."