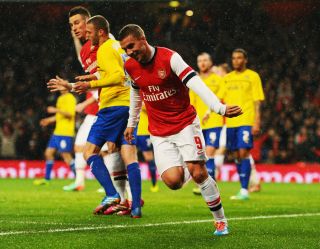 The Germany international - appearing for just the eighth time this campaign having suffered a hamstring injury - was a pivotal figure at the Emirates Stadium as Arsenal maintained their hopes of claiming a record-equalling 11th FA Cup triumph.

A first half completely dominated by the Premier League outfit was rewarded with two goals. Podolski kept his cool to go round Joe Murphy and score after a neat pass from Mesut Ozil, before adding a second with a back-post header after a well worked set-piece.

Coventry showed a marked improvement after the break, with Leon Clarke striking the post.

However, Arsenal added late gloss to the scoreline with further strikes from substitutes Olivier Giroud and Santi Cazorla.

Arsene Wenger's men can now look forward to the fifth round draw, which takes place on Sunday.

Arsenal named a near full-strength XI, with Alex Oxlade-Chamberlain starting for the first time since August, while Clarke featured for Coventry despite doubts over his long-term future.

The hosts showcased their superiority in the opening stages, with Carl Jenkinson looking particularly threatening at right-back, and it was no surprise when Arsenal took the lead on 15 minutes after a wave of attacks.

After being a spectator for the early part of the match, goalkeeper Lukasz Fabianksi had to be on guard to maintain Arsenal's lead when tipping Carl Baker's 20-yard strike over the crossbar following a fine solo run.

Yet things worsened for the visitors on 27 minutes when Per Mertesacker flicked Ozil's corner to the back post and Podolski headed home from close range.

From there Arsenal were queuing up to try and get on the scoresheet.

Jenkinson dragged an effort across goal, while Podolski spurned a chance to secure his hat-trick by blazing high and wide from the edge of the box.

After being over-run in the first half Coventry almost halved the deficit early in the second when Clarke broke free on the right only to shoot straight at Fabianski.

Clarke came even closer on 57 minutes. Franck Moussa finished a surging run by laying into the path of the striker, whose left-foot effort from the edge of the box hit the woodwork.

Looking to restore calm, Arsenal could have pulled further clear after the hour mark when Nicklas Bendtner shot wide from eight yards after strong build-up play.

With the game petering out, Wenger replaced Oxlade-Chamberlain with 16-year-old Gedion Zelalem, the first player to feature for Arsenal having been born after the Frenchman took over at Arsenal in October 1996.

Fellow substitute Giroud - who replaced Podolski - made it 3-0 in the 84th minute when he met Kieran Gibbs’ cut-back to drive home from eight yards.

There was still time for Arsenal to score again, Cazorla on hand to finish after Jenkinson's initial effort had been saved, while Ozil hit the post in injury time.