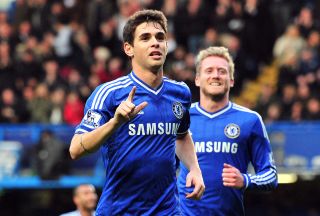 The hosts looked comfortable throughout as Stoke struggled to find a way through the home defence, but Chelsea had to wait almost half an hour to open the scoring.

Samuel Eto'o went down under the challenge of Erik Pieters to win a free-kick 20 yards out, from which Oscar found the net with a superb curling strike.

Andre Schurrle and Oscar were both denied by the woodwork and Stoke goalkeeper Asmir Begovic also produced several fine saves as Chelsea went in search of a second.

The result sees Mourinho - who won this competition in 2006-07 - maintain his record of having never failed to make it beyond the fourth round of the FA Cup during his two stints as Chelsea manager.

Chelsea handed a second full debut to Nemanja Matic, who returned to the club from Benfica earlier this month, while Stoke included Begovic following a month on the sidelines with a broken finger.

Mourinho's men made a bright start to the tie and Eto'o almost broke the deadlock in the opening minutes, sending the ball just wide of the right-hand post and missing out on what would have been his ninth goal at Stamford Bridge this season.

Peter Crouch got the better of David Luiz at the other end moments later, but directed his eventual header wide of the target.

Referee Chris Foy waved play on as Eden Hazard went down under the challenge of Wilson Palacios in the Stoke penalty area in the 14th minute, with replays suggesting he made the right call.

Chelsea dominated possession as the half progressed, although both sides were struggling to carve out any clear-cut goalscoring opportunities.

However, it only took one shot on target for the hosts to go ahead – Oscar curling a wonderful 20-yard free-kick into the top left-hand corner of the net in the 28th minute.

Chelsea should have extended their lead in the closing stages of the half, with Frank Lampard failing to get enough purchase on a sliding effort inside the six-yard box and Oscar powering a shot against the right-hand upright moments later.

Stoke's record of having not scored at Stamford Bridge on their last five visits will not have filled the travelling support with confidence as their team chased an equaliser, and Chelsea continued to look most likely to find the back of the net after the break as Schurrle struck the post early on.

Oscar, who was among Chelsea's top performers, sent the ball just wide following a well-worked move in the 53rd minute, before Jonathan Walters blasted wide at the other end.

Ramires and Eto'o both squandered chances to convert from close-range after a Hazard cut-back as Chelsea looked to put the result beyond doubt.

With time ticking away, former Chelsea striker Mark Hughes decided to throw on Oussama Assaidi, who netted the winner when these sides met in the Premier League last month, but the Moroccan could not inspire fightback during his 18 minutes of action.

Begovic was forced to push over his crossbar from a thunderous Luiz free-kick in the closing stages, but Stoke were unable to avoid succumbing to their seventh consecutive defeat at Chelsea.