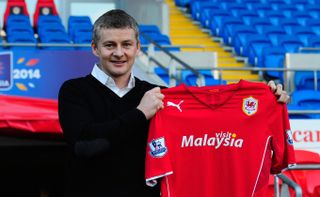 The Norwegian was confirmed on Thursday as the successor to Malky Mackay, who departed Cardiff last month following a long-running dispute with club owner Vincent Tan.

Solskjaer - who enjoyed an 11-year stint at Manchester United during his playing career - has forged a strong reputation in Norway, steering Molde to two Tippeligaen titles.

One of his first tasks will be to stop Cardiff shipping goals late in games, with the Welsh outfit having dropped points in each of their last two league matches through conceding in the closing stages.

The Premier League's bottom club, Sunderland, scored twice in the last 10 minutes on December 28 to rescue a 2-2 draw, while it took leaders Arsenal 88 minutes to breach the Cardiff defence en route to a 2-0 win on New Year's Day.

Cardiff have slipped to 17th in the table due to a run of one win in 10 matches, but Solskjaer is confident he can inspire a revival.

"I have always wanted to come back to the Premier League," he said. "I am really looking forward to convincing the Cardiff fans that I am the right man to take them forward."

The 2008 finalists will be determined to make it past Newcastle, having been knocked out at the third-round stage in each of the last three seasons.

Newcastle have enjoyed a successful season to date, but head into Saturday's game on the back of consecutive 1-0 defeats in the Premier League.

Pardew will be without full-back Mathieu Debuchy and central defender Fabricio Coloccini.

Steven Taylor and Mapou Yanga-Mbiwa are likely to fill the defensive voids, and the latter is itching for an opportunity to shine.

"If the manager needs me to play, I am ready. I will play for the team and do my best," he said.

"At the training ground I do my best, work hard and wait for my chance."