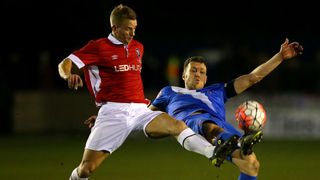 Salford City's run in the FA Cup is over following their 2-0 loss to Hartlepool United in a second-round replay at Victoria Park.

The non-league side, who knocked out League Two Notts County in the first round, took the tie to extra-time but slipped to defeat after Scott Fenwick and Mikael Mandron netted for the hosts.

Meanwhile, Scunthorpe United booked a lucrative third-round trip to Chelsea after beating Leyton Orient 3-0 in a replay at Glanford Park.

Jean-Yves M'Voto's own goal put the hosts in front just after half-time before Jack King doubled the Iron’s lead five minutes later. Hakeeb Adelukan tapped in a third to give Scunthorpe’s fans a day out at Stamford Bridge in January.

Finally, Walsall will face former manager Dean Smith's Brentford in the third round after they beat Chesterfield 5-3 on penalties following a goalless draw at the Banks's Stadium.