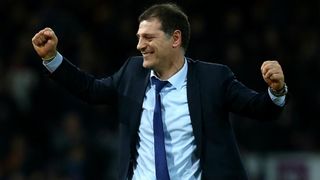 Slaven Bilic is eyeing FA Cup glory this season, with the West Ham manager preferring to win the competition than qualify for the Champions League.

West Ham welcome Wolves to Upton Park in the third round of the FA Cup on Saturday.

Bilic and Co. are flying high in 2015-16, with the Londoners sixth in the Premier League and only four points outside the top four and the Champions League places.

However, the Croatian insisted he would rather win the world's oldest association football competition than compete among Europe's elite.

"The proof is silverware. So I would prefer to win the FA Cup...and then finish fifth or sixth!

"The FA Cup is special. There was a stage before they changed the format of the Champions League when the cup was good because through the cup you would qualify for the Cup Winners' Cup and only the league champions would go through to the European Cup.

"But then they changed it and made it the Champions League. Suddenly it was more important to finish in the top three or four in the league than to win the cup.

"But in England, the FA Cup for me never lost its value."