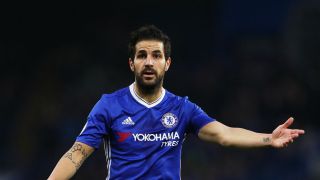 Fabregas set up Willian's second of the match as Chelsea provided an instant response to Peter Crouch's 64th-minute equaliser at Stamford Bridge.

Another Old Trafford favourite, Wayne Rooney, is next on the list with 445 matches to reach 100, while Chelsea's all-time record goalscrorer, Frank Lampard, hit the landmark in his 559th game.

Fabregas made his Premier League debut for Arsenal against Everton in 2004 and played 212 times in the competition for the Gunners before joining Barcelona in 2011.