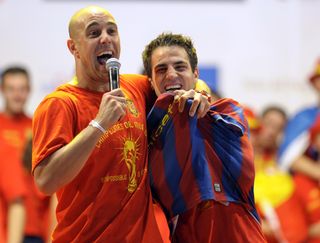 Reina was farmed out on loan to Serie A outfit Napoli this season to link up with manager Rafael Benitez, his former Anfield boss, after Liverpool signed Simon Mignolet from Sunderland.

Valdes has already spoken of his desire to leave Barcelona at the end of the season to explore new opportunities.

The Spaniard came through the youth system at Camp Nou and has remained at the club ever since, but Fabregas and his team-mates are resigned to the fact that he will play elsewhere next season.

And Fabregas wants the Catalan giants to try to sign Reina, who he believes could be a vital addition on and off the field.

Fabregas told Radio Catalunya: "Victor has been here for 10 years and none of us can imagine another keeper in his place when we turn and look at our goal.

"Valdes has many roots here but is leaving for his life, he is curious to see how things are elsewhere, so his children can learn English and experience another culture.

"As he has said and for how we know him, it seems almost certain.

"One of the things that Pepe (if he signs) can bring is that he knows all of us.

"He provides for a very good atmosphere in the dressing room and is experienced."