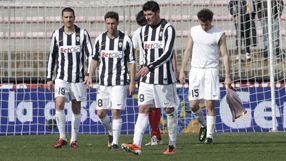 Media reports have speculated Del Neri, who only took over in the close season, could be sacked if seventh-placed Juve lose in Turin irrespective of the strength of their opponents.

Juve have played stick or twist four times with coaches since returning to Serie A in 2007 after their match-fixing demotion and each time they have swapped.

Juve, also seventh last term, have given Del Neri the dreaded vote of confidence despite a Europa League spot not even secure for a club that desperately needs to get back into the Champions League to boost its dwindling financial muscle.

"It's a difficult period and we know that. The results are not in line with expectations but I confirm again that we are all united," president Andrea Agnelli told reporters.

Back-to-back defeats by modest Lecce and Bologna had long-suffering Juve supporters shaking their heads in disbelief that their club once ruled the roost in Italy and Europe.

It was all the more exasperating given Juve had previously beaten champions Inter Milan while they also defeated AC Milan in the reverse fixture at the San Siro in October.

Saturday's game is just as important for buoyant Milan following their 3-0 home win over third-placed Napoli on Monday which stretched their lead to five points with 11 games left.

Monday's win was not pretty but no Rossoneri will care as their first scudetto since 2004 appears on the horizon.

In reality, the trio have worked well together with Van Bommel often popping up in the box against Napoli and Gattuso's passing, never his strong point, improving by the game.

Coach Massimiliano Allegri's luxury of having to choose between Pato and Antonio Cassano to partner Zlatan Ibrahimovic and Robinho upfront suggests Milan will not be caught but second-placed Inter have not given up the fight.

The champions host mid-table Genoa on Sunday knowing it just needs one slip from Milan and victory for Inter in the derby on April 3 to put Leonardo's side back on course for a sixth straight title.

Lazio in fourth host Palermo on Sunday with Serse Cosmi taking charge of the Sicilians for the first time after Delio Rossi was sacked following the 7-0 home defeat by Udinese.