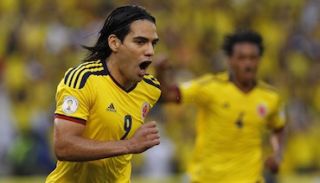 Falcao converted an early penalty, his seventh goal of the campaign, to give Colombia their fourth successive home win in the South American qualifying group, all of them without conceding a goal.

Teofilo Gutierrez bundled in the second on the stroke of half time as Peru continued a dismal away record which could ultimately wreck their chances of a first World Cup appearance since 1982.

Colombia, who have won seven of their 12 matches, are second in the nine-team group with 23 points and look almost certain to qualify.

Peru are sixth with 14 points and still have an outside chance, despite taking only one point from their six away matches.

With heavy rain and overcast skies making the Caribbean port even steamier than usual, Colombia took the lead with the first real chance.

Juan Camilo Zuniga was brought down by Victor Yotun and Falcao fired home from the spot.

Jefferson Farfan, surprisingly left out of Peru's starting line-up, was one of two players brought on after half an hour for the visitors as coach Sergio Markarian tried to bring his team to life.

Farfan quickly responded by firing a free-kick against the post, Peru's best effort of the game.

With Peru threatening to come back into the match, Colombia struck a crucial blow when Gutierrez turned in Pablo Armero's cross on the stroke of half-time

Peru made a lively start to the second half but it did not last and they had defender Carlos Zambrano sent off after a second booking in the 70th minute while seven other players were given yellow cards in an often niggly match.