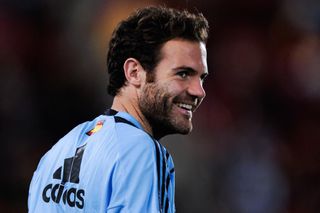 Defending champions Spain will start the finals as one of the favourites to lift the trophy, having beaten Netherlands 1-0 in the 2010 showpiece.

Either side of that victory, they won UEFA Euro 2008 and Euro 2012 and further success would only increase their standing as one of the greatest national sides in world football.

And Mata feels having a core of players that have played together for years, both at club and international level, has played a key role in their triumphs.

"I think we are like a family," he told Laureus.

"We've known each other for a long time and we've played together for the last six, eight years so we feel really comfortable between us and I think this is the key.

"If we can win this World Cup, winning the South African one and two Euro Cups in a row we will be talking about the most successful national team.

"I think there are a lot of good teams. Probably Brazil who are the favourites and then Argentina, Holland, Germany, France, Italy, England, I think they can try to win."

Mata describes winning the World Cup four years ago as his fondest football memory, but it is testament to Spain's embarassment of riches that the gifted playmaker is not guaranteed a place in Vicente Del Bosque's final party of 23.

"Probably I have the best memories that I have in my career winning the World Cup the first time for Spain and being part of the squad was probably my best moment in my career and one of the best moments in my life," he added.

"I think it's a privilege for a player to be here, to be in the 23 that travel to the World Cup and I will try my best as I always do."