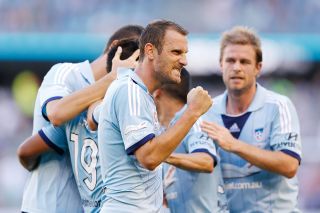 Having not managed a win in their previous five matches, few would have tipped the visitors to dominate the contest to such an extent at Etihad Stadium on Sunday, where an Alessandro Del Piero brace, together with strikes from Ranko Despotovic, Sebastian Ryall and Nick Carle, accounted for the hapless hosts.

And although Farina felt his players were equipped to end their poor run of results, he was as surprised as anyone by the scale of the triumph.

"I didn't see five coming, there's so point me sitting here and lying. But I saw a performance coming.

"We didn't have a bad player, I thought we controlled the game from first minute until the end. We weren't under a lot of pressure, we created a lot of chances. The scoreline was probably a fair indication of the whole game."

The only downside to the win for Sydney was an injury to influential former skipper Terry McFlynn, whose long ball forward set up Despotovic for the opening goal but was later subbed off injured at half-time.

"He's torn a muscle in his quad," Farina said.

Farina did confirm that fullback Pedj Bojic, a late withdrawal for the game, and young forward Joel Chianese are likely to return to fitness soon.

"Pedj Bojic ... he was only ruled out this morning. Trained very well yesterday (Saturday) morning. Got off the plane and something was going down the back of his hammy. He should be fine.

"Chianese should be ok, he got a bit of a knock and had to miss this week."