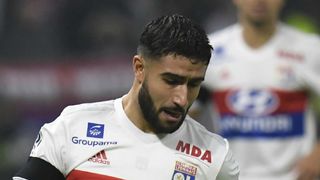 Lyon are not thinking about challenging for the Ligue 1 title despite cutting Paris Saint-Germain's lead at the top of the table to eight points with a 2-1 win, according to Nabil Fekir.

The Lyon captain gave his team the lead in stunning fashion inside two minutes at Groupama Stadium on Sunday, bending a 30-yard free-kick past the out of position Alphonse Areola.

After Layvin Kurzawa's thunderous volley and Dani Alves' red card for dissent, the game appeared to be drifting towards a 1-1 draw that would have left PSG with a double-digit cushion from the chasing pack.

But substitute Memphis Depay beat two PSG defenders and thumped a curling 25-yard drive into Areola's top corner to wrap up a night of high-quality finishing.

Fekir's third direct free-kick of the season was justification for pre-match comments from Lyon president Jean-Michel Aulas, who said he preferred the striker to PSG's Brazilian superstar Neymar, who was absent due to injury.

But while Lyon moved up from fourth to second thanks to their dramatic victory, Fekir played down hopes his side could rival PSG for the Ligue 1 title.

"We are very satisfied, but there are still a lot of matches," Fekir told Canal+. "We will fight to snatch a place on the podium.

"Paris have a lot of lead - the goal for us is to have a place in the Champions League."

OL president : "Taking all three points against the best team in the championship raises our spirits. This is a particularly important win for us." January 21, 2018

Of his goal, which caught Areola napping, Fekir added: "I initially wanted to aim for the centre [of the goal] but the placement of Areola makes me shoot on the opposite side.

"It's a goal that has allowed us to take advantage. Then we went a little too far back. During this game, we suffered a lot, because PSG have a big capacity to keep the ball.

"But what is important is that we stayed in place defensively. It was important and the whole team is to be congratulated."

PSG defender Marquinhos, however, felt his side did not deserve to slip to a second Ligue 1 loss of the season.

"I do not think the victory of Lyon is deserved, the draw would have been more logical," Marquinhos told Canal+. "They manage to hit and they score two goals.

"We must do better, we are aware of it, we will all work. We know that playing with 10 men is very difficult but we have already emerged from these situations. We tried to play, we had possession. But a goal at the last minute, it kills the game.

"In the first half we were better than Lyon who scored from their only shot. We managed to draw level and we started well the second half. But after the red card we got tired. We held, we defended well, but with a shot in the end, Lyon win."