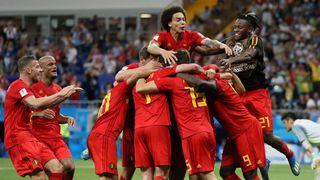 Marouane Fellaini and Nacer Chadli have been rewarded for their heroics in the 3-2 win over Japan and start for Belgium against Brazil in Friday's World Cup quarter-final.

Belgium were trailing 2-0 to Japan when Fellaini and Chadli came on for Dries Mertens and Yannick Carrasco, with both going on to score in a dramatic last-gasp triumph.

Roberto Martinez was expected to make changes after he hinted as much in his pre-match news conference, lauding the impact both players have had on Belgium's World Cup squad, not just their goals against Japan.

Elsewhere in the Belgium team, Kevin De Bruyne is to be deployed as part of the front three with Romelu Lukaku and Eden Hazard.

The Manchester City star had previously been used deeper in midfield, limiting his influence in the final third.

Brazil's starting XI was more or less known already, with coach Tite not hiding the fact Fernandinho was to start in place of the suspended Casemiro and Marcelo would return following a back injury.