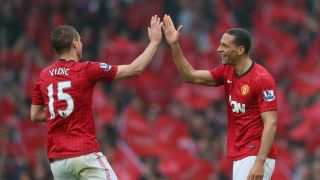 Former Manchester United defender Rio Ferdinand has paid tribute to his defensive partner Nemanja Vidic, labelling him his "favourite" player to play alongside, after the Serbian announced his retirement from football.

Vidic, who won five Premier League titles and the 2008 Champions League during an eight-year spell at Old Trafford, was released by Inter in January due to an ongoing hernia problem.

Ferdinand, who now works as a pundit after hanging up his boots in 2015, hailed his former team-mate's development and claimed Vidic made him a better player.

"To see what an unbelievable force he became while at Man Utd means the work he committed himself to physically and mentally is truly huge," Ferdinand posted on his official Facebook page.

"He worked on his strength in the gym, worked out what was needed for him to succeed in the Premier League and then started to establish himself in our team.

"I'm always asked about our partnership, did you do specific training, etc? Not really no, it was something that just worked very naturally.

"He was very aggressive, loved attacking the first ball in or out of the box, getting right into the opposing strikers and I liked the sweeping up and covering type stuff. But our partnership brought out the best in our games and made us strive harder to be the best.

"My favourite partner to play alongside – YES."

Vidic arrived in England in December 2005 from Spartak Moscow for a fee of £7million and former England international Ferdinand admitted some members of the dressing room had doubts over the centre-back's quality early on in his United career.

"'Where is he from' ... 'he is well out of his depth' … these were the type of comments flying around the training ground after the first few training sessions we saw Vida!" Ferdinand revealed.

"He became a defender that was feared, he could fight with the most physical, he crunched into tackles, he attacked the ball better than anyone I've ever seen.

"But as he will tell you with a smile, he could also play with the ball too, which made him complete and a great defender. Because he was so good in the aggressive/attacking the ball areas people probably looked over his ability with the ball to his annoyance!

"As a friend he is made of the top stuff, always honest and thoughtful but also game for a laugh (when he is ready)!

"Manchester United miss him now and so will football."