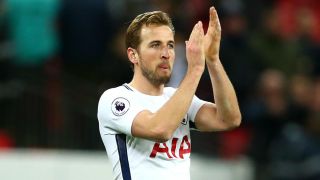 Kane was not among the goalscorers but the Tottenham frontman proved to be a handful in Wednesday's 2-0 win over United at Wembley.

The England international was instrumental in Christian Eriksen's opener after just 11 seconds in London before United defender Phil Jones turned the ball into his own net prior to half-time, while Lukaku struggled to make an impact up front for Jose Mourinho's men.

"I think Kane showed today why he's the best striker in the league and one of the most potent in Europe because he's bullied United's centre halves," Ferdinand told BT Sport.

"He totally dominated them physically and brought other people into play. The contrast between him and Lukaku today was so evident it was unbelievable from up here where we watched it.

"The ball going into him, sticking, holding centre halves off and bringing others into the game. That's a real number nine. That's what you want to see a number nine do."

United remain second in the table after 25 matches but Tottenham – fifth in the standings – moved within five points of the Red Devils.