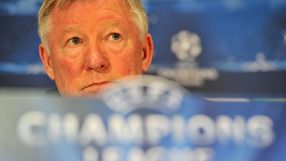 The United manager's patience with his players appears to have worn thin, as they once again found themselves needing to battle back from a losing position.

Speaking to The Guardian, Ferguson said: "It's been the story of our season, starting badly and losing goals and fighting back to rescue games. It's the front players who are doing that for us. Some of our football [against Braga] was terrific, some fantastic football. We created a lot of chances. But it is a concern we are losing goals."

The visiting Portuguese side found themselves 2-0 up within 20 minutes in Manchester, only for a scrambled Jonny Evans effort and a Javier Hernandez brace to spare United's blushes.

Despite eventually registering their third Champions League win of the season – and maintaining their 100 percent record – it was the eighth time the Red Devils have fallen behind in all competitions this campaign, something that has left their manager frustrated.

He said: "I can't understand our defending. I can't get to the bottom of it. If you analyse all the goals we are losing, they are all different types, a cross and then a cutback and players free in the box [against Braga].

"It is difficult to put my finger on it. We are certainly not getting good starts to games, that's for sure.

"It's the home games we are losing the goals so early. Away from home it is not a problem in terms of early goals. We will sort it, I am sure of that."