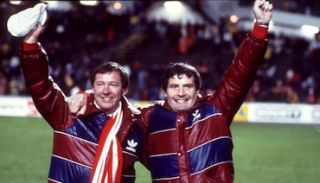 Hard graft, pride in your work, respect for your colleagues and a refusal to back down when you feel you are right were the values Ferguson learned as a boy in the tough streets of post-war Glasgow and which were honed as an apprentice tool-maker in one of the most unforgiving work environments imaginable.

Like many great managers, Ferguson is somewhat frustrated that his playing days are dismissed as an appendix to his career but he was no mean performer. Rangers were happy to pay a then-Scottish record fee of £65,000 pounds to take the scrawny but fearless striker from Dunfermline in 1966.

It should have been the glorious peak of his playing days with the club he supported as a boy but things did not go to plan and, after famously being blamed for a Scottish Cup final defeat, he eventually left, angry and unfulfilled as his playing career drifted to an end at Ayr United in 1974.

The challenge of gelling the competing egos of his current multi-millionaire playing staff might seem a light years from when he set out on his 39-year managerial adventure as part-time boss of minor Scottish club East Stirling but the values he established from the start remain in place now.

Known as a hard taskmaster, few have crossed him and stayed around long to tell the tale, but at the heart of his success is his pure and enduring love of the game.

At 71, with an army of staff at his disposal, Ferguson is still the first to arrive at United's training ground. He may not now have such a hands-on role in terms of coaching but his presence is everywhere.

He displays the same boyish enthusiasm whether watching the latest crop of 16-year-old hopefuls among a scattering of friends and family or overseeing the first team in a Champions League clash watched by hundreds of millions the world over.

Many of those viewers, and United fans whose memories begin with the advent of the Premier League in 1992, will probably never fully understand the depth of the fundamental and surely permanent transformation in the club's fortunes brought about Ferguson.

Today, United bestride the game on and off the pitch, their worldwide brand ensuring a torrent of income that enables an ever-changing playing staff to win trophy after trophy.

In a sport where managers, even successful ones, have a mayfly lifespan, Ferguson's reign of more than 26 years is nothing short of astonishing.

He has been knighted and honoured by people and institutions the world over and sits proudly at the top table of the most influential people ever to have had a hand in the sport that dominates every corner of the planet.

Ferguson will walk away from Old Trafford having won 25 major trophies and having established such a level of consistency that United have never finished outside the top three in the Premier League.

Yet when he arrived from Aberdeen to replace Ron Atkinson in November 1986, United were a very different animal.

Not only had they gone 19 years without winning the league, they had barely challenged for it. Only five top-three finishes, and of course the ignominy of relegation in 1