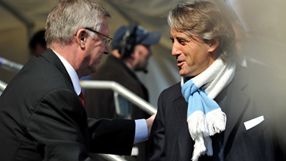 United hold a three-point advantage going into the highly-anticipated showdown but a win for City would put them top on goal difference with two matches to play.

"I think City probably would win it," Ferguson told the club's website on Sunday. "Yes. I think, with two games left, they'd have a great chance."

City's penultimate game is at Newcastle United, who are chasing a Champions League place, before Roberto Mancini's side meet relegation-threatened Queen Park Rangers at home on the final day of the season on May 13.

United were eight points ahead of City in mid-April but defeat at Wigan Athletic and a 4-4 draw at home to Everton last weekend when they let slip a 4-2 lead have put their cross-town rivals back in the title frame.

Ferguson said he was pondering "two or three options" in team selection to face City, who have won three in a row.

"I just know what we want to do in the game. We've got enough experience and pace in the team, enough good footballers and determination," Ferguson added.

"I think we'll be alright in that respect. The game could be decided by anything, I hope it's not by a bad decision, that's for sure.

"There's focus on both teams to make it a good game. It's important as we're representing the city all over the world. [UEFA president] Michel Platini is making an effort to come to the game. It creates a certain occasion and we want to represent ourselves the right way."

Mancini said the pressure was all on United.

"For them, I think a draw would be a good result...but I don't think they have this mentality. Like us, it's difficult for us to play for a draw, we want to win always also when we play against a better team than us, like in this moment, like against United."

Volatile striker Mario Balotelli is available again after suspension but Mancini is unlikely to break up the flourishing partnership between Sergio Aguero and ex-United man Carlos Tevez, whose return from exile has coincided with City's revival.

Mancini said that he would likely sell the ill-disciplined Balotelli at the end of the campaign following his red card in a 1-0 defeat against Arsenal on April 8.

Asked if he could trust fellow Italian Balotelli for such a high-octane game on Monday, Mancini, with a smile on his face, replied: "I think this game, yes, only this game."