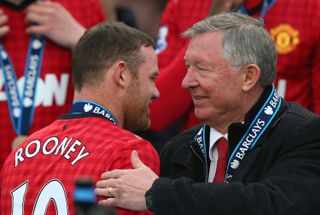 In his book, Alex Ferguson: My Autobiography, the Scot admitted he had always been hard on the striker to ensure that he maintained his fitness levels.

The 71-year-old revealed that he had used the England international less last season as doubts grew over his capacity to maintain high performance levels.

"Wayne needed to be careful," he wrote. "He has great qualities about him but they can be swallowed up by a lack of fitness. Look at the way (Cristiano) Ronaldo or (Ryan) Giggs look after themselves.

"Wayne needed to grasp the nettle. If he missed a couple of weeks for United, it could take him four or five games to get his sharpness back.

"He would receive no leniency from me. I would hammer him for any drop in condition. It was quite simple – he wouldn't play.

"That's the way I always dealt with fitness issues, regardless of the player involved, and I saw no reason to change in the final years of my career.

"In my final year, when he was left out a few times, and replaced in big games, I felt he was struggling to get by people and had lost some of his old thrust.

"But he was capable of making extraordinary contributions. That pass to (Robin) Van Persie in the win over Aston Villa that secured the title for us was marvellous, as was his overhead kick against Man City.

"Those flashes guaranteed his profile. But as time wore on, I felt he struggled more and more to do it for 90 minutes, and he seemed to tire in games."

Ferguson also revealed that Rooney sometimes struggled to control his anger and it would become particularly evident when he criticised the 27-year-old.

"And he would rage in the dressing room when I picked him out for criticism," he added. "His eyes would burn, as if he wanted to knock my lights out.

"The next day he would be apologetic. When the anger subsided, he knew I was right – because I was always right, as I liked to tease him. He would say: 'Am I playing next week, boss?', 'I don't know,' I would say.

"In my opinion he was not the quickest learner but what he had was a natural instinct to play the game, an intuitive awareness of how football worked. A remarkable raw talent. Plus, natural courage and energy, which is a blessing for any footballer."

The former Manchester United boss also confirmed that the striker had asked to leave the club at the end of last season and revealed details of the discussions he had with the player.

"He (Rooney) came into my office the day after we won the league and asked away," he wrote. "He wasn't happy with being left out for some games and subbed in others. His agent Paul Stretford phoned David Gill with the same message.

"All players are different. Some are happy to stay at the same club their whole careers; others need fresh challenges, as Van Persie felt when he joined us from Arsenal.

"The urge to fight and flourish would not be extinguished in Wayne. I left him to discuss his future with David Moyes, hoping to see many more great performances from him at Old Trafford."