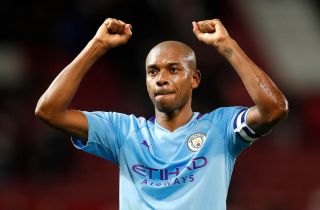 Fernandinho has signed a one-year contract extension with Manchester City, the Premier League champions have announced.

The 34-year-old’s previous deal was due to expire at the end of the current season.

Fernandinho has been a cornerstone of the City side since moving to the Etihad Stadium in a £30million move from Shakhtar Donestsk in 2013.

The Brazil international said: “This is the best possible news. I have enjoyed every second of my time at City.

“I never expected to build such a meaningful relationship with the club and the fans, but it has happened, and I am grateful every single day.

“Our fans are unbelievable. I am so happy that I will continue to play for them a year longer. I feel their love and passion and it genuinely helps keep me driven.”

Fernandinho, who is regarded as one of the best defensive midfielders in the game, has shown his versatility by playing at centre-back for Pep Guardiola’s side this season due to shortage of specialists in that position.

He said: “My focus now is on making sure we continue to be successful. My time here has been decorated by silverware, but under Pep’s guidance we have really accelerated. I want that to carry on for as long as possible.”

Director of football Txiki Begiristain said: “This new deal reflects Fernandinho’s quality and commitment. He is not only a first-class professional and one of the best players in world football, he is a fantastic person who leads by example every single day.

“We have a talented young squad – but making sure they are supplemented by senior players of Fernandinho’s ilk is of paramount importance. What he brings in terms of leadership and professionalism is valued by everyone at the football club.

“He is a player with outstanding technical quality, and his appreciation of the game allows him to play multiple positions. He is also a player without ego, someone who values his teammates and recognises the importance of the squad.”

Meanwhile, City winger Leroy Sane has stepped up his comeback by returning to training with the rest of the squad.

The German has been out since suffering a knee injury in the Community Shield against Liverpool in August. The 24-year-old returned to light training earlier this month and the club have now published a photograph of him involved in a session with his team-mates.