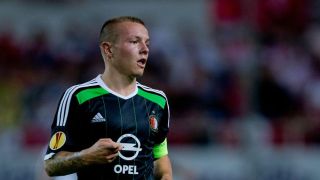 Feyenoord captain Jordy Clasie has been withdrawn from Sunday's friendly against Fortuna Dusseldorf due to the "serious interest" being shown in him.

The midfielder has been linked with a move to Premier League side Southampton throughout the close-season, with reports suggesting the Netherlands international will be a replacement for Morgan Schneiderlin should the latter join Manchester United.

Southampton manager Ronald Koeman confirmed in May that Clasie is a player on his radar if Schneiderlin departs, and talk of a switch to the St Mary's Stadium is sure to intensify after the Eredivisie side pulled him out their squad to play Fortuna.

"Jordy Clasie does not play this afternoon against Fortuna Dusseldorf. The reason is that there has been concrete serious interest shown for the captain," Feyenoord posted on Twitter.

"The club and player have therefore after consultation decided not to let him play."

If Clasie were to move to the south coast it would mean a reunion with Koeman, who was previously head coach at De Kuip.