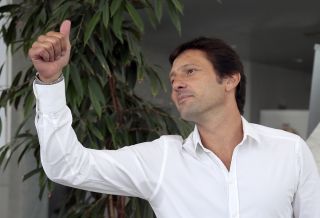 The Brazilian was handed the suspension by the French authorities following an altercation with referee Alexandre Castro after Paris Saint-Germain's 1-1 draw with Valenciennes in May, however his lawyer confirmed on Tuesday that the Administrative Court of Paris had provisionally lifted that ban.

In a statement, the FFF said it will now take that ruling to the State Council, although they recognised that Leonardo is free to work with clubs outside of France in light of the decision.

"The Federation will in the days to come (go) before the Council of State," the statement read.

"FFF reiterates that Mr Leonardo is free to engage with a foreign club because the decision has not been extended to foreign federations.

"Finally, the FFF said that if Mr Leonardo was to apply for a licence in France, it reserves the right to consider his past behaviour before proceeding with such a request."

Leonardo resigned from his role as sporting director at PSG in July following the initial decision, and officially left the club at the end of August.