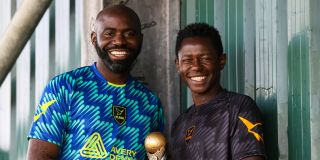 KLABU, an organisation who provides refugee camps in Africa and beyond with access to sport and sporting equipment, has teamed up with EA to release football kits within the new FIFA 21 game.

The KLABU Kalobeyei Spirit kit with both home and away strips available to all consoles and players within the game, while the foundation is also giving away consoles and TVs to the Kalobeyei Refugee Camp.

As part of the partnership between KLABU, FIFA 21 and sportswear branding and labelling manufacturer, Avery Dennison, a match was organised between UK-based former refugees, attended by new KLABU ambassador Fabrice Muamba, formerly of Arsenal and Bolton Wanderers. Muamba was a refugee himself but now says he's an avid FIFA player.

“It is inspiring to see this kit in a globally recognised setting and fantastic that so many sports stars and influencers are getting behind the cause," Muamba said.

“More businesses like Avery Dennison and EA SPORTS need to get involved with helping organisations like KLABU as they can provide vital resources to improve the lives of those in refugee camps.

“Sport is an escape route to many people, including myself, whether it is physically or digitally, we are all one.”

Sadumba Ochang, KLABU Clubhouse Leader and defensive midfielder of City Boys FC, added, “Getting to play FIFA 21 in the KLABU clubhouse will be a massive inspiration for the youth in the Kalobeyei camp, empowering them to be part of the global FIFA movement."

Avery Dennison is the official names and number partner for Premier League, Real Madrid and, Barcelona, producing the patches and lettering for shirts. The company has played a pivotal role with KLABU kits in previous years, producing the crests, the chest and sleeve logos, as well as the back graphics and neck tape; they are now working with KLABU as an official partner to increase the awareness of the vital work being carried out by the organisation.

“In football, we all speak the same language, we struggle together, we adapt together, the sport does a lot for us and it’s a pleasure knowing there are organisations like KLABU working with the camps across Africa to give them the same gift sport has given to me,” said FA registered referee and former refugee, Jacob Viera, who was invited to officiate the game.

“For the Kalobeyei Spirit camp teams to see their own kit in the most recognised game worldwide, it will help them see the bigger picture that they are part of.”

More information on how to unlock the kit in FIFA 21 will be released later this month. In the meantime, you can buy your kit now at Klabu.org and help to unlock sports for young refugees.