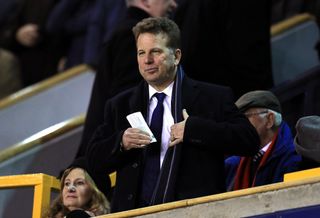 QPR chief executive Lee Hoos has accused FIFA and UEFA of being “incapable of governing” over their failure to issue an adequate response to allegations of racism.

Hoos says QPR are still awaiting a decision from UEFA following the abandonment of a friendly between QPR’s under-18s team and Spanish side AD Nervion in August, due to claims of racist abuse by opposition players.

Hoos said he is “disgusted, embarrassed and dismayed to call them our governing bodies” – and accused officials of treating racism with the same degree of importance as “a broken seat in a stadium”.

📝 #QPR have issued a statement regarding the investigation into #QPRU18's being racially abused almost three months ago.— QPR FC (@QPR) October 30, 2019

Hoos’ criticism comes in the same week that Bulgaria were ordered to play one match behind closed doors, with a further match suspended, and fined just £65,000 for the racist behaviour of their supporters during a Euro 2020 qualifier against England.

Referring to the Bulgarian sanction, Hoos said in a statement: “UEFA have responded to this one issue of blatant racism but both FIFA and UEFA seem to treat complaints about racism like a complaint about a broken seat in a stadium.

“I am left confused, frustrated and incredibly angry that more than 10 weeks after we lodged our complaint of racism, we are still awaiting a decision.

“There were a substantial number of people within the game who warned me that this issue would be swept under the carpet and I am appalled to see this appears to be the case.

“I am disgusted, embarrassed and dismayed to call them our governing bodies when they are incapable of governing.”

Meanwhile, Gary Neville says it will take a team to walk off the pitch for a sea change to happen in the fight against racism, and believes England’s players are brave enough to do it.

England players and staff were subjected to monkey chanting in Sofia, and some supporters in Bulgarian sections of the stadium could be seen making Nazi salutes.

Former England and Manchester United defender Neville, now a Sky Sports pundit, can see the issue coming to a head soon when a team decides it has had enough and leaves the pitch.

“Everybody would have supported the players and Gareth Southgate in walking off the pitch, but then what I would expect is that if they were punished for that, that other nations would support England and withdraw from the competition,” he said.

“That’s what is going to need to happen here.

“Nations are going to need to take it into their own hands because the governing body are not dealing with it in a satisfactory manner.

“Some of the greatest changes that have been stimulated in society have been through individuals being brave, and we have got some brave, young individuals within that England squad who are not going to take it any more.”