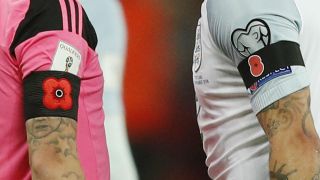 FIFA will be applying common sense in relaxing its ban on England, Scotland, Wales and Northern Ireland's national teams displaying a poppy on their shirts, according to UK sports minister Tracey Crouch.

All four of the UK's national sides received fines from FIFA's disciplinary panel last November for displaying poppies in various forms to honour Armistice Day, a decision that prompted an intervention from prime minister Theresa May, who described the punishments as "utterly outrageous".

FIFA felt the poppies broke their rules over the use of personal, political or religious slogans or symbols, but new guidelines from the International Football Association Board (IFAB) on Monday are expected to relax the regulations.

According to reports, FIFA negotiated with the home nations and proposed revised provisions last week which would mean the poppy could be worn as long as the match organisers and each team's opponents agree on its use ahead of a particular fixture.

"I am pleased that it appears that FIFA is finally going to apply common sense and change its position on poppies," Crouch said in a statement.

"It is completely right that footballers and fans alike should be able to wear poppies with pride, as a tribute to the bravery and sacrifice of our serviceman and women."

In a statement to Omnisport, IFAB said: "The IFAB is releasing a set of clarifications on the Laws 2017/18, including (inter alia) an updated (more detailed) guideline on what can be worn by players on their equipment. It should assist competition/match organisers to better define/decide what is permissible.

"These are being sent to all national and international football bodies today and will come into force with immediate effect.

"These clarifications do not require any further ratification, as they have been approved by The IFAB's Board of Directors (body authorised to approve such clarifications, which are not Law changes)."

Northern Ireland commemorated Armistice Day with black armbands when they played Azerbaijan, while Wales did not opt for a visible commemoration by their team, but were fined as fans wore poppies in the stands, while a card mosaic was raised before their match against Serbia.

England are expected to play Germany at Wembley in November, if they secure World Cup qualification next month.