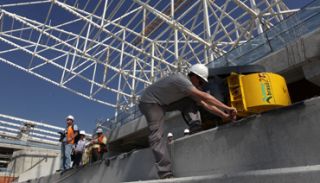 Football's governing body, which has allowed several stadiums to over-run the deadline for this year's Confederations Cup warm-up event starting next month, said that "no compromises" would be made when it came to the real thing next year.

"FIFA is for sure concerned as it is vital that the firm deadline of December 2013 will be kept," football's governing body said in a statement.

"The host cities, federal government and stadium owners have committed themselves to this date and acknowledged that for the FIFA World Cup, no compromises can be made to avoid jeopardising the successful staging of football's flagship event.

"This crucial not only for FIFA but for the entire host nation."

FIFA has insisted that the six stadiums not being used for the Confederations Cup will be ready by December. They are in Sao Paulo, Manaus, Cuiaba, Natal, Porto Alegre and Curitiba.

Brazilian media quoted the head engineer at Sao Paulo's Itaquerao stadium as saying that work would over-run by two months.

Frederico Barbosa said that, although the main part 48,000 capacity stadium would be finished in time, the extra 20,000 temporary seats to be added for the World Cup would not.

"The technical teams of FIFA and the Local Organising Committee have reinforced the tight monitoring on all remaining six FIFA World Cup stadiums not only limited to Sao Paulo," FIFA added.

FIFA set a deadline of last December for the six Confederations Cup stadiums to be completed, but has allowed several to over-run.

Rio de Janeiro's Maracana was opened with an exhibition match 10 days ago, but it was only one third full and only two of the entrances were used. A test event due to be staged on May 15 was cancelled on Tuesday.

Recife's stadium is due to open on May 14 and Brasilia's Mane Garrincha stadium four days later.