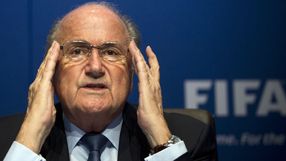 The suggestion, which is unlikely to be voted on this time around, is part of a long-term process aimed at cleaning up football's corruption-plagued governing body and making it more transparent.

FIFA president Sepp Blatter is currently in his fourth term, having been re-elected unopposed last year at the age of 75.

The Congress in Budapest on May 24-25 will also be presented with a code of conduct which specifically tells members: "We reject and condemn all forms of bribery and corruption."

FIFA's Congress will this year be asked to vote on a number of changes to the statues which include strengthening the ethics committee by splitting it into two sections, one part for investigating cases and the other for judging them.

It will also vote on a suggestion to increase FIFA's executive committee from 24 to 25 members with the extra place being reserved for a representative of women's football, who must be female.

However, the more drastic measures have been reserved for a draft version of the statutes which will be presented and discussed but not voted on.

"Persons may only be elected, re-elected, seconded, nominated, engaged, confirmed or appointed as president, a member of the Executive Committee, a member of a standing committee... until the age of 72," said the proposal.

"[They] shall meet this requirement at the time of the election, re-election, secondment, nomination, engagement, confirmation or appointment."

Paraguay's Nicolas Leoz is the oldest member of FIFA's executive committee at 83 while senior vice-president Julio Grondona, aged 80, has been on the committee since 1988.

"Any persons who hold or seek to hold an official FIFA position which requires election or confirmation by the Congress shall be subjected to a prior, in-depth integrity check by the Nomination Committee," it said.

It added that the check would include "obtaining a character reference, a police clearance certificate or a similar certificate".

"The integrity check shall be conducted again prior to a re-election or extension of the mandate."

Another proposal is to place a greater responsibility on member confederations "in particular to ensure that its officials comply with the statutes, regulations (including the FIFA Code of Conduct and the FIFA Code of Ethics) and decisions of FIFA".

The draft also includes a definition of country as "an independent state recognised by the international community".

However, it added that "an association in a region which has not yet gained state independence may, with the authorisation of the association in the country on which it is depende