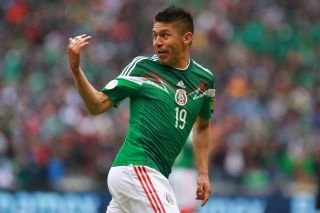 The All Whites were trounced 5-1 at the Azteca Stadium on Wednesday, and hence need a 4-0 result or better in Wellington on Wednesday to book their ticket to Brazil next year.

And while Ricki Herbert's men can plan an all-out attack against the Mexicans, the visitors to NZ have other ideas.

Mexico striker Oribe Peralta, who scored a double in the first leg, said he would not be adverse to drilling the advantage further to gain some momentum ahead of their likely finals berth.

"I know that the score is large for us but we have to try to increase the advantage in the second leg to get the ticket to Brazil 2014," Peralta said.

Naturally, NZ captain Tommy Smith has not conceded defeat just yet, and said the hosts need an early goal before they can start dreaming of completing the unlikely comeback.

"I think that's the only way forward really, we have to get an early goal and put them on the back foot as soon as possible," he said.

"With the result in Mexico, we felt like we let the fans down a little bit, so we just have to go all guns blazing and do as well as we can."

Herbert kept attackers Shane Smeltz and Marco Rojas fresh for the second leg by resting them for the first clash, and they will need to be on song to give NZ any hope of scoring four times.

Leo Bertos and Chris Wood will both serve suspensions after picking up yellow cards in the first leg.

Ivan Vicelich will also miss due to suspension, although fellow defender Ian Hogg is again available after being banned for the first leg.

Mexico coach Miguel Herrera picked an all-Liga MX squad for the first leg, and is keeping the same approach for their trip to New Zealand.